So, it looks like we will never see another Fog Fall game. There isn't even a FogFall site anymore. We will probably never know what mysteries lay in Puffin Bay. Wait, that's a terrible rhyme. Anyway, I thought I'd bring together everything we know about, or at last can interpret about events in the FF universe.
First of all, we should remember that most things are intentionally left vague, and some information provided is straight up misleading (or rather retconned, at least I guess that's what happened to the identity of our protagonist).
Setting:
We have an alternate universe here, with the divergence point around Cuban Missile Crysis of 1962, as evidenced by game description, newspaper and audio from the first game.
Newspaper on the floor in the first game comes from October 1962 and the last date on the calendar is 16th of some month in 1962.
We can say that the timeline for the original owner of the house would be something like that:
-October 1962 – Cuban Missile Crysis, Homeowner hides in the cellar, Nuclear bombs are dropped outside
-16th of November or December – for some reason the Homeowner stops keeping time
-16th of April, presumably 1963- Some creatures (irradiated "pink" humans?) try to get in, Owner bricks himself in the room under the well
-3rd of May, same year – Hatch is blocked and the Owner can't get out
-Around 46 days later (18th of April) Homeowner dies
The Protagonist isn't the same person as the Homeowner, although that's clear clearly implied in the first game.
In the meantime, there are big changes happening outside, even though FF1 again would have us believe that the bombs fell recently. The society is rebuilt to some degree, inhabited areas (called Zones) are protected by force filelds and inter-zone communication is enabled by railway (as evidenced by the newspaper clippings in FF4). First forcefields were tested in Puffin Bay, but the details were left for the canceled FF5. Apparently, at some point, there was humanitarian aid sent from somewhere. After some time something important happens and the former USA is divided into Eastern and Western Zones, with no communication between them. Whatever institutions were re-established (at least in the Eastern side, specifically "Zone 1"), such as newspapers, hospitals, and railways, are now defunct or nearly so. Even the forcefields are failing, at least o some degree, allowing some people to leave their Zones, at least in certain spots. A number of organizations are present in the Zone. The Watchers are apparently struggling to control the countryside, but they are impeded by some kind of resistance (including Anne, Joe, and Lynch), with contacts to Zone Administration. I suspect it's some kind of conflict between forces of the old federal (or inter-zone) government versus separatists, but I'm not sure, there simply isn't enough info provided. The capital of the zone – called either Coopertown or Cupertown - is apparently controlled by a mafia-esque organization, though they also have their agents in the countryside (the boy present in both FF3 and 4). The space between Zones is inhabited by some mysterious "Them". All those things must have taken at least a few years and it's implied, that it took much longer, contradicting FF1.
Note:
Regarding geography – the newspaper from the first game suggests we are somewhere around Chicago, that is the state of Illinois, though that's not guaranteed. (IRL Chicago Times wasn't even around in 1962 so it's hard to say how widespread it's supposed to be in-universe). There is no place called Cupertown, but there are three Coopertowns, in Tennesee, Florida and West Virginia. One thing we know for sure, from one of the notes, is that we are in the eastern US, but that can mean any of these places. Zones seem to be rather small, the size of a city, rather than an entire state. Basically, we are in a pickle. Especially considering that in the FF4 we learn we can leave our Zone and we set out for Puffin Bay, which is in Alaska, long way from any of our possible locations and definitely in the West.
The only thing left to discuss is the most baffling: who is our Protagonist? He is not the Homeowner, after all, we've seen his body. At the same time, he seems to be unaware of the outside world. To make things worse we never see his face. I personally think he is one of the "creatures" that the Homeowner hid from (he was afraid that they would break in and the Protagonist must have done this). The same creatures that serve as the others for the population of Zone 1. The same creatures that leave outside the Zones. The same creatures the Protagonist kills in FF2 and mafia enslaves in FF4. The "pink" humanoids, who prove to be capable of speech in FF4. Though they are monstrous in appearance, they are probably humans suffering from radiation poisoning. That's why the hospital is full of them and that's why they seem apathetic and generally miserable. My theory is, that after breaking into the cellar the Protagonist started leaving there and convinced himself he is the owner, repressing the memories of the outside. The intro to FF1 states that he bought the house two months before. Perhaps that's how long he lived inside our bunker. Being "pink" would explain his desperation to wear gloves and facemask, even though other characters often don't and survive. It also explains the broken mirror in the bunker.
Last note – why does FF1 feature a periscope, allowing us to see an apparently intact neighborhood? Well, I suppose almost the entirety of FF1 was later retconned, but I am also reminded of a scene in a cult-classic Polish movie. It features a society leaving underground after a devastating war. After main characters escape, they realize that the periscope showing a post-nuclear wasteland outside... was actually just pointed at a maquette, obscuring lush vegetation. Perhaps we have an inverse here.
Top

The story for TFF5 was written. Maybe you should start a wiki if you have time on your hands. Anyways, you can contact Maciej Palka on Facebook if you have one. I don't. He is a nice guy. I think the layout of Pastel Games did not make clear that Mateusz did not make all of the games... So I guess you can assume that more people contacted Matt to find out what happened. Mateusz said in a stream he thinks it was rather a ''covert front copy''. Which I could not disagree with more. You should ask Maciej Palka if he can send the script. Because likewise, I doubt the game will be made. I also doubt that any Pastel Games series will be finnished in game maker on steam, it is just to unlikely.
Top

Yeah, I think (I don't remember to well) but I posted it before. Karol did not write the story for TFF4 so I doubt it was for 5 either.
Top

So, there is some time with this second post, but can we add the discussion Fog Fall 5 theories and suggestions to this or the other way around?
Top

Two Source Pictures of Palka's Illustration of Intro One 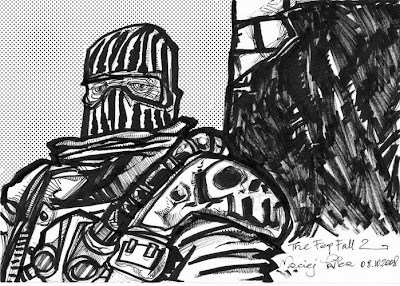 The Kennedy Speech recorded on take in Chapter one
https://www.youtube.com/watch?v=ZLxgeINIBEM
Top

Matt made an update for the 4 Fog Fall games and will or is keeping them on his site for 24 hours, if someone missed it DM me on discord, I can give it to you.
So far two problems;
Chapter 3:
-When taking a look at the book, it doesn't have the sound it has in Chapter 2,
-The spagetti is still there in the bigger screen, not on the smaller one.
-Matches are not on the stove in Chapter 3 so it not being there in the bigger screen makes it un-find-able.
Top
Post Reply
67 posts

Return to “other pastel games & comics”