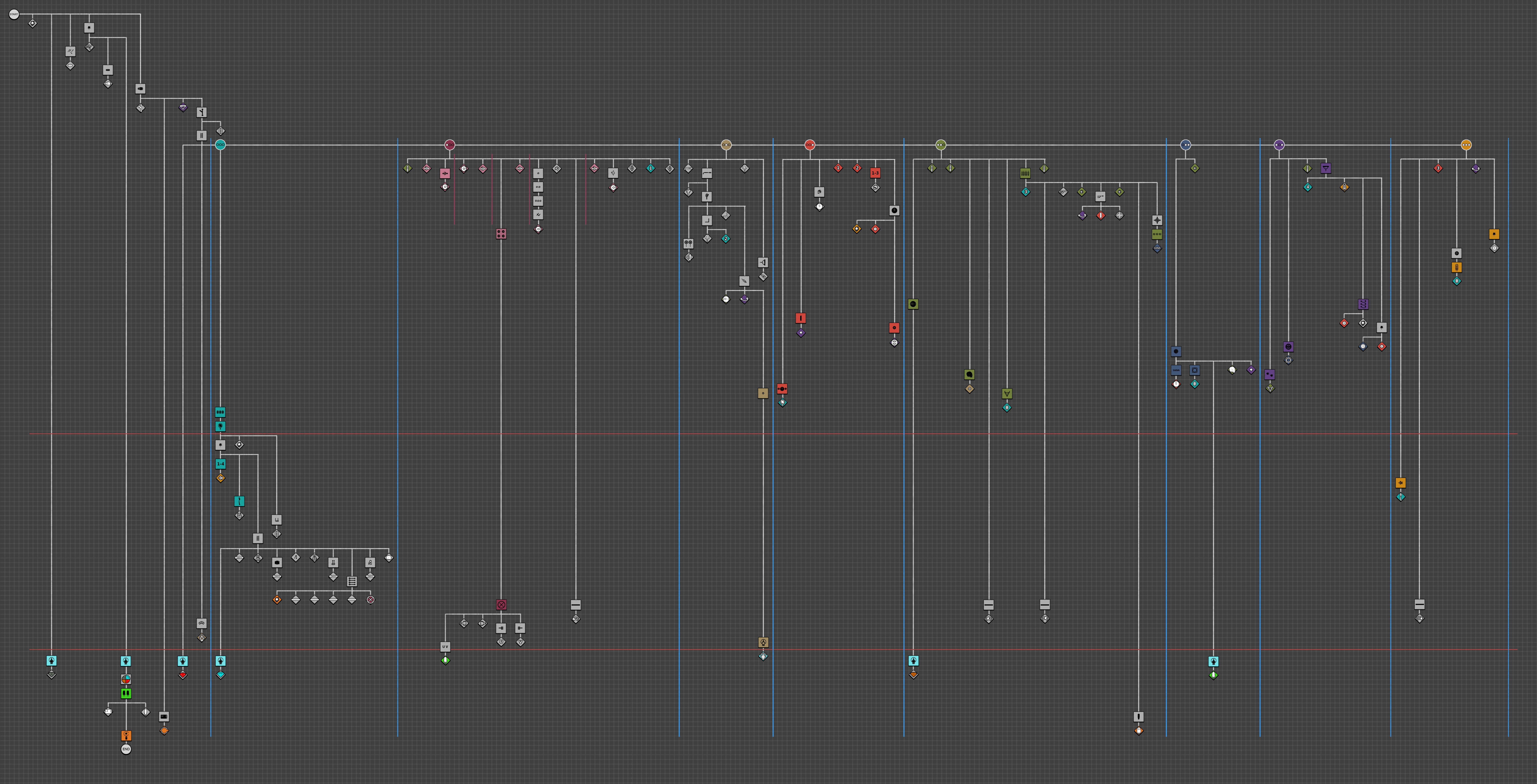 I think it's safe to say Skutnik didn't skimp on the last entry.

With a graph as large and overwhelming as this one I think it is best to start with the graph's structure. Submachine 10 is divided into 4 acts. The first is the tutorial, which hosts just as many locks and keys as the entirety of Submachine 6 does. The second act involves exploration of the seven coordinates and cross solving puzzles between them. Act 3 starts when the player travels to the lighthouse and ends when the karma stabilizer is fixed in the Lab. The fourth and last act, the finale, sees the player exit through the lighthouse by making a light crown. The second, third and fourth act are separated on the graph with red horizontal lines. The eight coordinates are also separated with blue, vertical lines.

Act 1: The graph shape of the tutorial is unfortunately reminiscent of the second half of FLF. You need to get a key to unlock a lock to get a key to unlock a lock 6 times sequentially to get to the second act. No player choice involved. What is great about the tutorial is the establishment of the light sphere. The empty light crown serves as the Exit's first puzzle. If a light sphere is inserted into a crown, it can transport the player 1 tile horizontally, regardless of obstructions. This is a great concept unique to 10, with also has basis in previous established concepts like karma portals and teleportation devices. Light spheres are used a total of 6 times through the game, (1 time in act 1, 2 times in act 2, 1 in act 3 and 1 in act 4), which is surprisingly seldom compared to the constant use of karmic water in submachine 9, but helps tie the experience together and make it feel cohesive.

Act 2: The graph widens incredibly, and offers an experience very reminiscent of the Basement and the second half of the Lab, only in a much bigger scale. The player is initially offered immense choice in what order to proceed with the puzzles around the coordinates, but quickly the choices narrow down as the puzzles unite and start to co-depend. This leaves the graph with four major paths: Three paths for obtaining the portal stabilizers and one for obtaining the portal charge. Unique to the Exit, the four paths sometimes overlap and interact with each other. For example, using the insulator cap gives you access to an area with one of the portal stabilizers, but also gives you access to a cog used to get the portal charge. There is also a fifth and sixth path the player can take, but these end up in dead ends (one for a plasma charge in coordinate IOO and a device for charging the karma stabilizer in OIO. Lastly, there are 7 more puzzles which the player can't solve until act 3 and 4 which the player can't interact with. Four involve sub 1 fuses, 2 involve the karma stabilizer and the last involve the sub 2 fuse. Another thing to point out is that none of the 7 areas are designed equally. All coordinates have different graph designs and puzzle amounts. IIO sees the player do a lot of backtracking and revisiting to complete, while IOO only need to be visited two times.

Act 3: A miniature version of act 1, 2 and 4 combined. A very linear, straightforward first half (with one backtracking point to III) leading to an exploration focused second half with 4 choices of paths. The ending of act 3 sees the player retrieve a bunch of fuses and a valve. The player will need to go back to IOO, IIO and III to use the fuses and get the karma stabilizer. Charging the empty karma stabilizer the Lab (OIO) leads to...

Act 4: Tying the loose ends. The player must retrieve the final 6 keys (4 tiles and 2 plasma charges) to access the final area. It is up to the player to find the stabilizer spots themselves. If you were like me, I decided to just restart the game and go through all areas again with a fresh pair of eyes for broken karma spots to find these. After opening the passage to the top of the lighthouse the player must backtrack two more times to create the light crown.

Inserting the light sphere into the crown and using it completes the game.

This is a game clearly designed with the intent of challenging the player's endurance, memory and orientation skills. Keys, lock and areas from all the previous 9 entries return, being reused for new puzzles. In terms of graph shape, it combines the more linear, straight forward shape of the later entries (the Plan, the Temple) with the thick, wide and choice filled shape of the earlier entries (1, 4, 5). These two designs are not combined organically, instead opting for very abrupt and jarring transitions between the two, making for an unnerving and restless atmosphere. Lastly, and quite unique to Submachine 10 due to it's sheer size, the game is filled to the brim with backtracking points, which come into play in act 3 and 4. These backtracking points are found in a majority of areas previously explored in the game. Completing the game sees the player go back to the tutorial area several times.

This is not a game you decide to sit down and relax with on a Sunday evening (says the guy who is writing this on a Sunday evening), but a game for the player who seeks a challenge and who has experience and knowledge of all that has come before. Completing this game will drain your mental resources, and may not make you very eager to play more Submachine games in the future... but that is kind of the point here. Putting the nail into the coffin and not looking back, Submachine 10 will make you ready to take that step. One could go as far as to say that Submachine 10: The Exit is the type of game you may only want to experience every ten years. With that said though, Submachine 10: The Exit is an amazing game design accomplishment, and I hope more people take their time to experience this last entry in this wonderful point-and-click series.

Thank you for reading the dungeon graph breakdown of the Submachine games.
Top

Submachine 10 got updated a few days ago and it looks a lil improved. It's nice and maybe a little overlooked. ¯\_(ツ)_/¯
Top

Ko9 wrote:Submachine 10 got updated a few days ago and it looks a lil improved. It's nice and maybe a little overlooked. ¯\_(ツ)_/¯

huh? What was updated?
Top

Some graphics and shadows I believe. Also the games screens are bigger now and allow a close up like zoom in.
Top

Mateusz announced somewhere he's going to update it? Wow, he was saying he won't return to Submachine games before TBG is released, not? Anything that is beyond lifestreams.

Was updated holy flash internet version, or HD downloadable version? For example, what room was update in graphics and size? I don't see visual differences in first rooms of Northen Garden section.
Top

Sublevel, he didn't announce anything, the engine got a little updated and faster, there are some more options you can zoom in but I believe that was an option and some graphics where edited.
Top

Sublevel wrote:huh? What was updated?

Sublevel wrote:For example, what room was update in graphics and size?

I believe it might be beneficial, if you notice changes to the game and Mat didn't announce them, to specifically list them out so that we may have a nice record of exactly what changed. For the benefit of everyone involved. That would be nice.

So, like Sublevel asked, which graphics? That seems to be important.
Top

Sorry I didn't read it correctly, or enter my brain good enough. As far as I know the stone that wasn't colored in the Angel ruins. The stone loops work faster, you can see the game engine being better and I do not know where else, I was rather tired writing these and I might just noted stuff that was already there since I didn't play it for half a year.
Top

Stone in 000 location, with christian statues and karma passsage to Lighthouse? It was colored years ago, after many people including me noticed it.
And loops are still completely laggy for me here.

And game version at the bottom of screen still tells February 2018...
Wait, what exactly did you make to think Sub10 was updated, KO9?
Top
Post Reply
745 posts