@Sublevel, that would be fine, but I believe there where conversations about Other Games not being Pastel Games not being allowed. Making a separate board for Games that are not Mateusz games could be non-Pastel Media board... which would make sense if the Music proposal would be included.
Top

excuse me, but it doesn't make any sense.
What, now it's forbidden to talk about any other games, movies, or any other big stuff that demands separate thread?

Pastel Community didn't have such boundaries for more than decade. People here talk about everything. And even if some boundaries would appear in the future - history should be untouched, if it is not some personal information or some hard talks of some people that wants it to be forgotten and deleted.
It went beyond factory walls...
Top

Oh Sublevel... I am sorry but I didn't wrote that, I saw it written on another thread.

If you think the whole history should stay untouched that is a fine argument, just as an good one to delete the 3 posts threads.

Yeah no boundaries before this, no without discussion of the poster editing posts. Yeah not at all.
Top

Enihc, I'm assuming you're good for the ability to delete threads since you seem bent on deleting some of your own. I'm not going to fight you on deleting the threads you mentioned since they're your own personal stuff.

I think PNCE should be in with CF threads if they get grouped together. But the CF threads should be in a sub-sub under "other games". I don't think it's developed enough to have a main page presence. (Also, WI2014 should only be on the CF Wiki if it's canon)

10 Gnomes sub-subforum, not thread. Just making sure you have the right terms down. And no, 10G should not be on the main page.

Again I disagree with the music subforum/sub-sub idea. There's not enough material. Maybe a specific thread with a bunch of links in the first post will do.

We already have the "other Pastel games" subforum, Ko9. But anything after that is categorizing everything way too much. There simply aren't enough threads; they'll just get drowned in subforums, basically. Each time you add a sub-forum/sub-sub, it's another link to click.

I agree with Ant about T&S threads.

RE: A'llukin - I finally added my opinion in the original proposal. Will contact -ak- about this, though 1) I doubt he'll respond and 2) I can't imagine he'd be too bothered by most of this since his presence has been minimal

Wow, so people are talking about specific threads they want gone now, I see. Maybe wait until we vote to have the ability to delete threads first before we get really involved in that - just a suggestion. And when it comes to that time, there's no way we're doing it one by one; there will be a compiled list and it should go through an all-or-nothing vote. If there's disagreement, then we send it back to discussion.

Currently have an inconclusive opinion on Reed's suggestion for the GenDis sub-subs.

I understand the lack of threads for the way I would like it to be... It does makes a little sad, but it's understandable.

Will we talk about the specific threads after 20 November or before?

I do not really understand reed's proposal currently.

I am still working on my own list for ALL OF EM'. I understand that if that is currently not the plan, but then it will be saved on my PC on a neat notepad file.
Top

After Nov 20. Currently working on an Excel doc to provide a visual comparison of all our ideas for subforum breakdown; lmk if I got your right once it's posted.

Question marks in boxes mean I am not sure of placement or I have no clue with what you want where.
Top

For me, the Pastel Music one would be a one for Music in general. Pastel or not Pastel. But I am still thinking if I like the approach of a mixed Pastel and not-Pastel music. Which I don't to be honest.

Other pastel Games and comics are correct, but then that is still divided in sub-sections for the different creators. That is my ideal proposal.

Theories and Suggestions are separate Sub-Forums in the main page in my proposal.

I just think that A'llukin should be moved, to where I don't mind. So if I had to chose I would add it to personal projects like Apoc and Ant did.
Birthdays, Collaborations, Pastel Topics, Other Interests and Personal Projects are all things I get behind. So if it is still not clear, I am gonna make an Exel and print screen it and add it to this post. 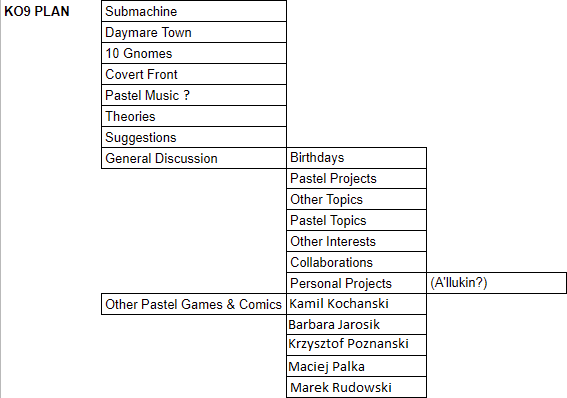 Updated, but you need to choose between

1) using "Collaborations" and "Personal Projects", which divides projects by the amount of people working on them

2) using "Pastel Projects" and "Other Projects", which divides projects by the relevance to Pastel media.

You can't have both because they're two different ways of dividing the same set of threads.

@Ant: Just keep this in mind though. There are three more 10G games coming down the road. The last one is going to be yuge, too. Not trying to persuade you to change your plan, but that's totally what I'm doing.
Top

It has 2:55 am when I made it, but I updated it. I also forgot completely that Mateusz has other games himself, I put that still under the list of other Pastel Games and Comics in my proposal: 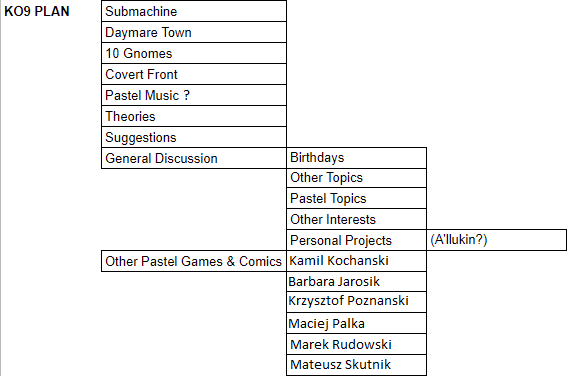 Okay, fine, 10 Gnomes can get its own folder. There's like a hundred of them anyway.

That said, I am still not a big fan of separating creative works at all. Collaborative versus personal is not much better than Pastel versus Non-Pastel. I mean, you've put A'llukin as personal ,even though there's a large community aspect to it, while it is going on, and it is more akin to a forum story. Are we going to have to have forum stories in two categories?

As for separating works by author - what about collaborations? What about the fact that most of the forum users are here for Mateusz and the rest of the PastelGames are more of a legacy remnant, whose names most of us don't know. Like, I know Karol Konwerski and Maciej Palka, but I can't remember anything the rest have done. It was a known issue with the PastelGames brand after all, this is not too surprising.
"We didn't leave the Stone Age, because we ran out of stones."
Top
Locked
1182 posts